Home   Director's Notes...   In the studio and training the teams 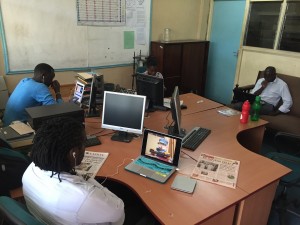 It’s Saturday and I have stopped by our offices at Nyayo Stadium to take care of some business before we head back into the studio in the neighborhood of South B in Nairobi, Kenya.

The Rotary Foundation grant that we are fulfilling right now includes providing equipment and training videos for young artists. It’s a task that is a little bit outside of the scope of our normal Project HAND UP goals. It was a special request by the past District Governor of Rotary in Kenya.

Two nights ago I received this text message out of the blue: “Thanks, for everything you are doing for us. I really appreciate the training it will really help me prosper.”

You see, right now, we are making updates to the puppet shows. This means that the teams are not touring the show this week – but in the mean time the puppeteers and other artists are spending their days on iPads and computers watching training videos on everything from puppetry and video editing software to business skills and making formal presentations.

“The tutorials were awesome” is another text message I received even last night. I spent all day in the recording studio from 10am to 8pm before finally reaching home at 11pm and was wondering how things were going in my absence.

It’s nice to see that even our peripheral goals are being fulfilled slowly by slowly as we work at HIV prevention education.

So why are we recording again? One of our skits deals with the negative stigma of people living with HIV. The characters in the show speculate and spread rumors about a child who may or may not have HIV. After many shows, we finally decided that it needed to be changed. First, because we thought we could get better actors to do the voices; second because we felt something was lacking.

We wanted the child character to not only state clearly that he does have HIV, but to stand up for himself and his own family. This way, we still address the issue of rumors and stigma, but also have a smart character that is an example of living boldly and without fear, in spite of carrying the virus.

It’s working. Yesterday we got a group of professionals from the top rated comedy TV shows made in East Africa in a room – along with radio presenters with recognizable voices. Not one person in the room hasn’t been affected by HIV/AIDS in one way or another. Together we recorded edits and whole page changes to the play. We have two more days of recording to finalize this version.

So as of tomorrow afternoon we will have a better show, with more laughs, that communicates an even greater message.

Then, in the coming weeks the puppeteers will rehearse with the new soundtrack and then take the show on the road AGAIN!

Thank you, everyone, for your support.

…the program assists so many children. As much as much as we teach, they also need a lot of input from people like you and your organization.  When it comes and you talk to them, they know more and they feel that they are also appreciated by the communities outside and the society. So I say thank you for your program and continue with the same spirit.”